Emotional marketing value (EMV) dates back to research performed in the 60s and 70s on a variety of different languages. It was determined that there are basic underpinnings in language that are always interpreted with the same “emotional” reactions. This means that emotional language creates a very predictable response, something that can be very advantageous to marketers.

The Emotional Marketing Value is a score that looks to assess how likely words are to elicit an emotional response from a reader. Initially, this research was difficult to substantiate, and largely ignored. With the rise of digital technology that allows analysts to track web performance in real-time and with great accuracy, the validity of an EMV score appears to be more plausible. To determine the potential effectiveness of the EMV metric, an analysis was done on news.nd.edu.

An analysis was performed on headlines of the most viewed articles on the main digital news outlet for the University of Notre Dame, news.nd.edu, on the week beginning April 27, 2015. Data was gathered using Google Analytics in tandem with text analysis tools and competitive research to determine the effectiveness of certain writing and publication layout styles in relation to attracting readers to individual articles. All text analysis data and competitive research reflects publications as of April 30, 2015 while all data from Google Analytics is accurate from May 1, 2014 - May 1, 2015.

In total, 385 articles were included in the final dataset. Data was filtered to remove any articles published before May 1, 2014 and whose traffic was significantly below the average for the time period. Articles in memorium, announcing a new faculty or staff appointment, or that dealt with a large public event (i.e. a championship game or Father Hesburgh's passing) were excluded in an attempt to assess the headline and content over reaction to current events. The article titled Walking Through Doorways Causes Forgetting, New Research Says was also exluded as it was an outlier among the data points, garnering the largest number of visits over the period despite having been published in 2011.

Prior to this report, no effort was made to optimize the headlines on news.nd.edu, as a result headline scores included in the data set ranged from 0 to 70 and displayed a typical gaussian distribution. The following chart shows the distribution of headline scores on news.nd.edu with shades of green reflecting the average pageviews for articles in each bin ranging from 865 (light green) to 3,669 (dark green) 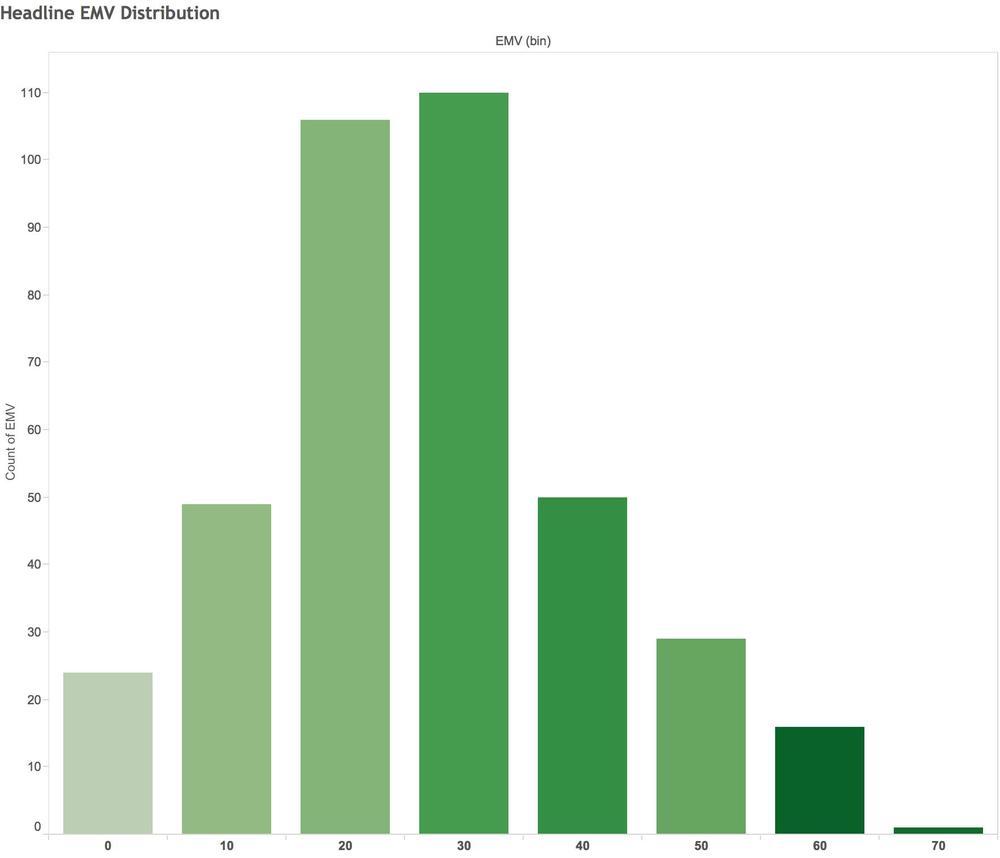 From this graph alone, it's already apparent that as the EMV score increases, so does the average number of pageviews. This trend is clarified further when plotting the individual articles. 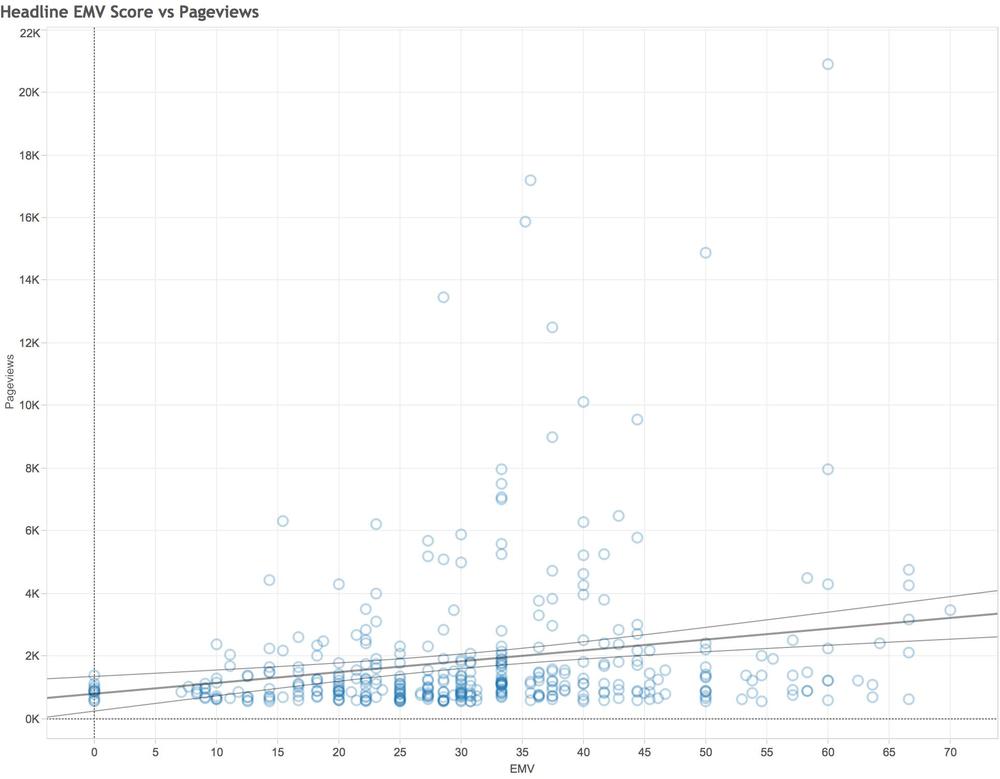 This plot, fitted with a trend line shows some coorelation between the EMV score and the pageviews on a given article. In this model, r-squared is equal to 0.0439199, which is low but not unexpected since we are attempting to quantify human behavior. The distribution of pageviews within a bin of EMV scores is greater as the EMV score increases as well, ranging from 550 - 1385 on the far left of the plot, to between 600 - 2100 for higher EMV scores.

When taking just the articles that fall within the 90th percentile in terms of total pageviews,  the trend towards a higher EMV score at higher total pageveiws is more pronounced. In this data set there are not enough points to say this is evidentiary of anything but it's a trend worth looking deeper into for articles with relatively high number of page views. 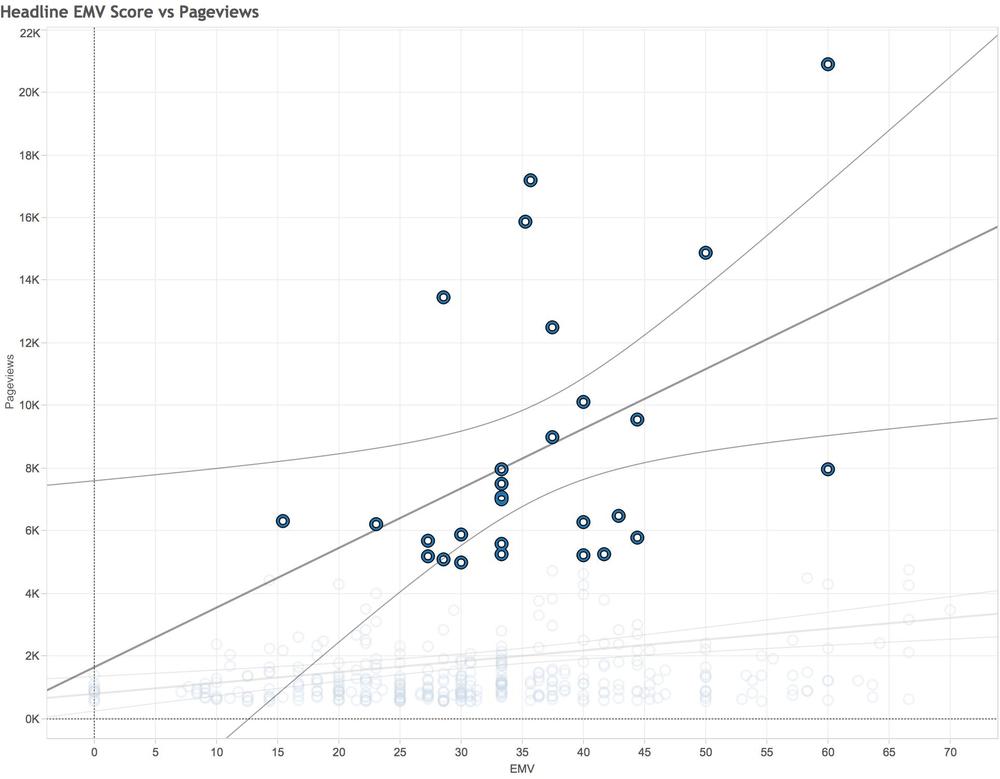 Overall, this data suggests that there may be a positive relationship between a headline's EMV score and it's tendency to be viewed by the audience. However, as reflected by the increased distribution to the right side of the chart above, a high EMV score doesn't guarantee more views. It could also be the case that articles that are more interesting and therefore more likely to be ready, have a higher EMV potential inherently. At most, it can be said that a high EMV score may increase the chance that an article will be heavily viewed.

A secondary analyis was performed on the data to determin the overall popularity of certain article types. In this instance, the data was not filtered. The first figure is a representation of the popularity of each article category with the box size representing the total number of pageviews for that category and the shade of green representing the category popularity adjusted for the number of articles in each category. It is possible for articles to fall into multiple categories. 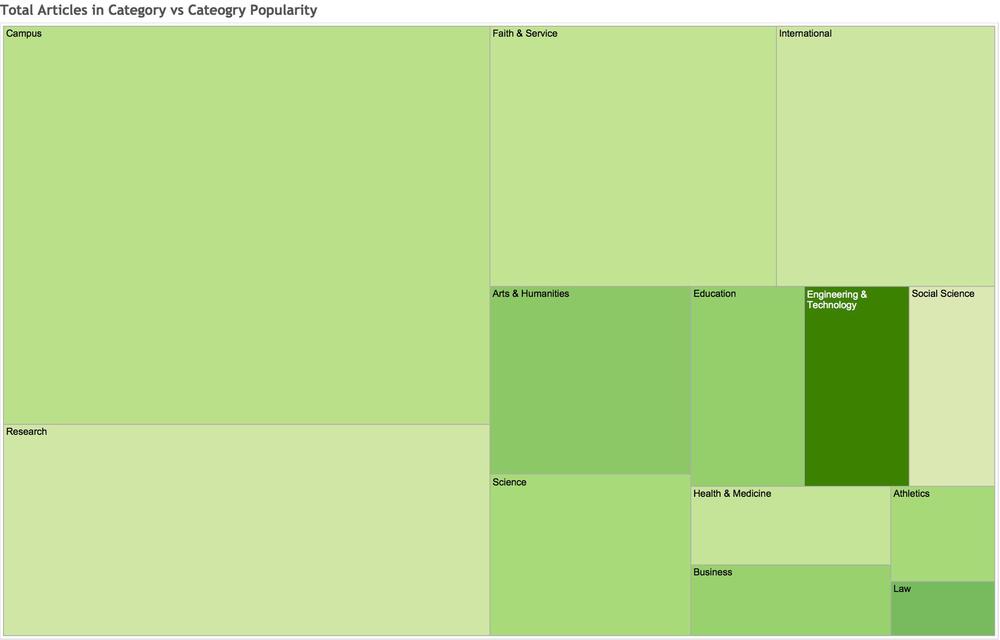 News that is categorized "Campus" appear to represent the most visited of any one category on the news site and, at first glance, the most popular. This tends to be a very broad category that includes stories and press releases about faculty and staff appointments, on-campus events, construction, parking. It is also the cateogry that includes the most stories. When adjusted for the number of stories published within each category, it's apprent that the category "Engineering & Technology" is relatively the most popular category. When both size and color is adjusted to reflect this popularity metric the results are the chart below. 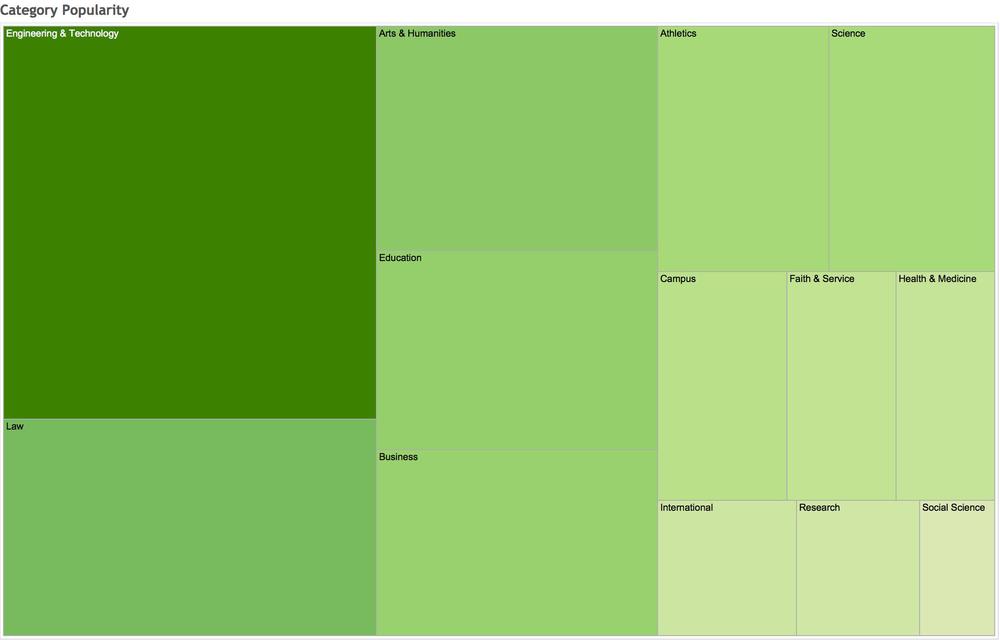 The goal, as Notre Dame aims to optimize it's news strategy, may be to equalize these relative popularity metrics. Producing content in amounts that are proportional to it's consumption by our user base, or driving traffic in a more effective way to the stories that we feel are important to the University.