Content marketing works best if it is used in a strategic, cohesive manner. Pushing content on a range of channels in way that's targeted to your specific audience based on past data and current news trends can exponentially increase your brand's visibility. Part of your plan requires a measured study into what you're audience is interested in reading, and why. Learning the particulars of your audience and discovering where those types of people invest their time will help you direct your content to the right places.

In 2015, the communications office made a decision to double down on storytelling and content creation. As part of this effort a strategic content group was formed to in part to create and push content that includes stories of special interest to the University. In addition, a marketing analytics team was put in place to identify, through predictive analytics, stories that will attract a wider audience to Notre Dame's digital properties. As part of gauging the success of these efforts a brief report was put together outlining the performance of feature stories on www.nd.edu.

Traffic to feature stories on the main University website (www.nd.edu) was analyzed for the calendar year 2015 and compared to previous years. For the purposes of this study, any mentions of “features” refers to pages with a URL that matches http://www.nd.edu/features/* and does not include links in the feature area to articles on news.nd.edu or What Would You Fight For stories, which will be abreviated as “WWYFF.”

For the 2015 calendar year, pageviews on feature articles were up 300% over 2014. Pages-per-session was up by 12.34%, bounce rate was decreased by 8.56% and the percentage of new sessions increased by 14.06%. Sessions as a whole were up 255%. This data suggests that not only did the features for 2015 calendar year do a substantially better job attracting users to the main University website, the content also encouraged users to engage with other parts of the site more frequently. This is especially remarkable considering traffic to www.nd.edu as a whole has decreased sice the previous year by more than 10%. 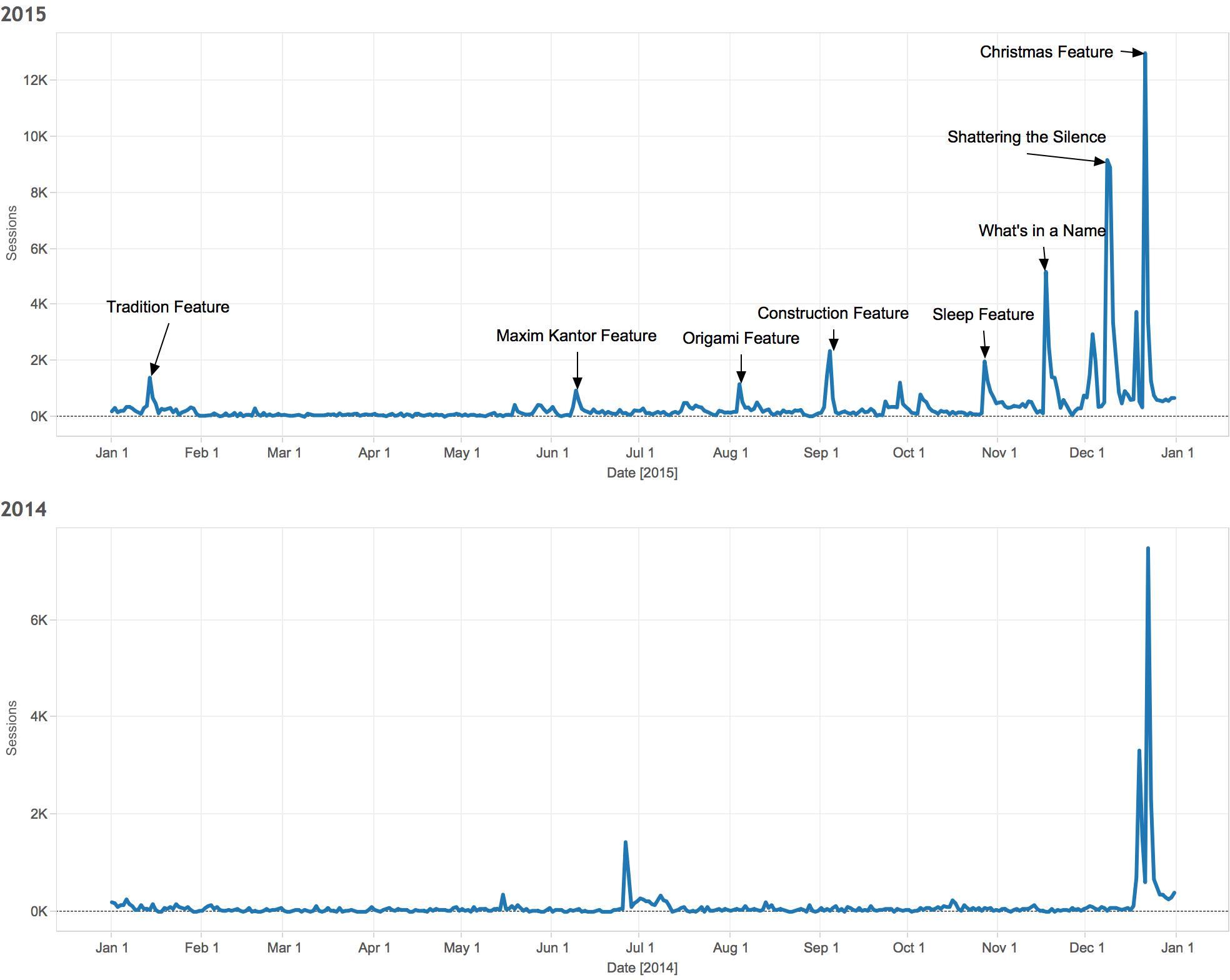 Feature articles increased in traffic from all sources, with the exception of email (although that metric can be misleading as a large number of the users in the direct bucket are coming from email). The largest gains were made on social where traffic increased by more than twenty-five times the traffic from the previous year. This is likely a combination of the increased prevalence of social media in addition to the more targeted strategy behind it. The bounce rate for organic traffic was also drastically decreased, suggesting an improved strategy in terms of publishing content that users were searching for and that would engage them beyond their initial search.

For Notre Dame and other universities, it's also important that our properties are attracting "the right" traffic, users who may be faculty, staff, or students at other academic institutions looking to collaborate with or continue their education at Notre Dame. To this end we also attempt to target users who are coming to our digital channels using on-campus network connections. The following universities had users who viewed featured content on www.nd.edu for the first time or at a significantly greater rate in 2015 vs 2014*:

What Would You Fight For

For the first time, features on www.nd.edu performed better than WWYFF stories, outpacing them 3:1 in terms of sessions and almost 4:1 in total pageviews. This could partially be due to that fact that WWYFF stories were moved to their own site (fightingfor.nd.edu).